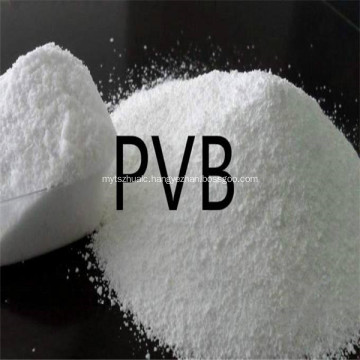 Polyvinyl butyral (or PVB) is a resin mostly used for applications that require strong binding, optical clarity, adhesion to many surfaces, toughness and flexibility. It is prepared from polyvinyl alcohol by reaction with butyraldehyde. The major application is laminated safety glass for automobile windshields.Trade names for PVB-films include KB PVB, Saflex, GlasNovations, Butacite, WINLITE, S-Lec, Trosifol and EVERLAM. 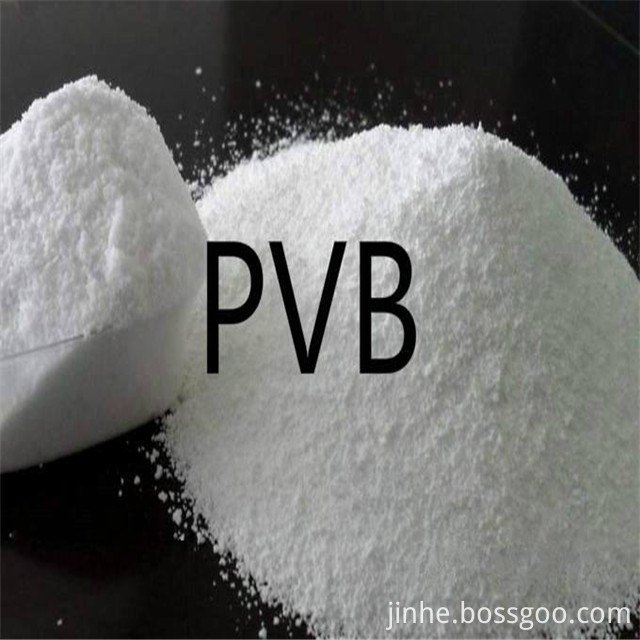 B. Solubility: PVB is insoluble in water and soluble in various organic solvents such as alcohols, esters and ketones, such as ethanol, phenylacetyl and cyclohexanone. And mixed with a variety of plasticizers such as phthalates, phosphates, fatty acid lipids. 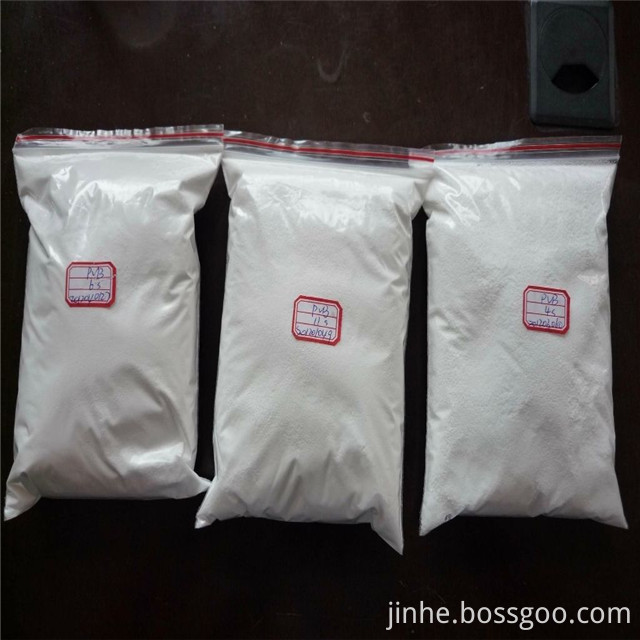 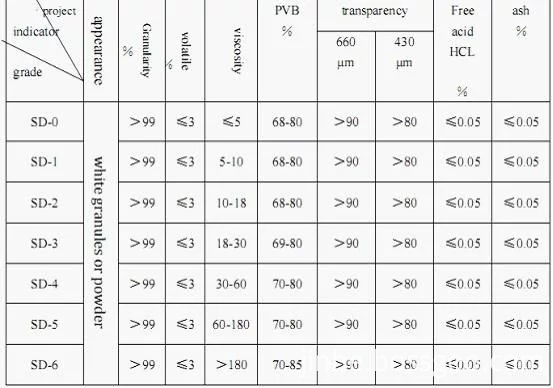 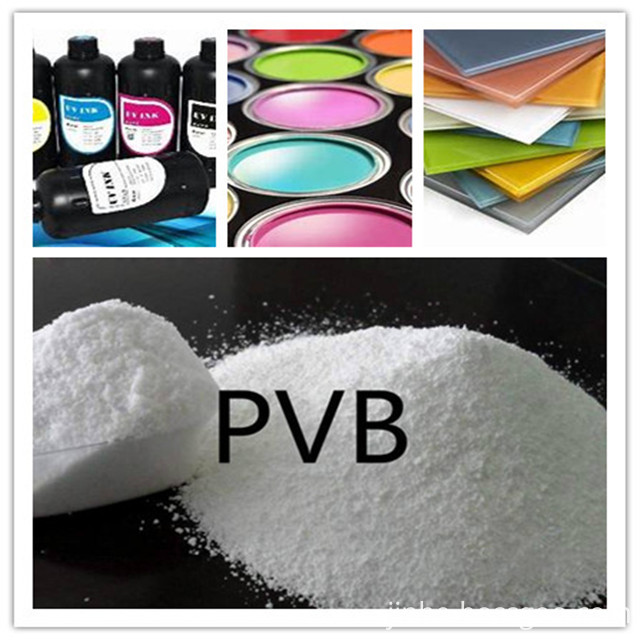 1). Transparent material: PVB has special bonding and high transparency to inorganic and organic glass. It can be used as a sandwich material for safety glass.

2). Coating: Because PVB has the characteristics of high bonding strength, cold resistance, oil resistance, wear resistance and corrosion resistance, it is widely used in:

Wood coating: surface treatment agent for plywood and primer for hard board and insulating board.

Metallic coating: Used in combination with other natural resins, synthetic resins, and drying oils to improve the impact resistance, flexibility, and adhesion of thermosetting resins.

Metal bottom knee: PVB can be used as a primer for metal materials such as steel, aluminum, galvanized, iron and copper.

Metal ink: It is mixed with nitrocellulose, maleic acid resin, etc., and is used as a metal ink for an aluminum plate or a copper plate.

Coating of metal box: Applying PVB solution on metal foil (mainly aluminum foil) can improve the strength and moisture resistance of the foil, and can be completely wrapped with heat only for packaging chocolate, biscuits and other foods.

Concrete coating: When the PVB solution is used as the primer, the durability of the water emulsion paint film can be improved.

Leather coating: PVB film exhibits strong elongation at room temperature and maintains this property at low temperatures, so it can be used to prepare a soft and elastic film, which has become a unique property of PVB resin.

3). Adhesive: PVB contains hydroxyl, acetyl and aldehyde groups and has high bonding properties, so it can be made into various adhesives:

Bonding of glass: Since PVB has extremely high adhesion, proper elasticity and flexibility, it is used to bond glass.

Bonding of metal: After mixing PVB with phenolic resin, it can be formulated into different grades of acetal phenolic glue,

Bonding of the enamel coil: The PVB solution is applied to the coil, and the coil can be bonded after heating.

Heat-sealing adhesive: PVB can be mixed with natural resin, synthetic resin and plasticizer, and can be used as a heat-sealable adhesive.

Bonding film: PVB can be used for heat bonding of cloth to cloth or other materials when combined with other synthetic resins, synthetic rubbers and plasticizers.

Coating: Apply PVB solution with plasticizer to various textiles to make it waterproof, prevent pollution, etc., and not damage the original feel and style of textiles.

Parts: PVB is mixed with synthetic rubber such as butadiene rubber, neoprene, etc., and can be molded into electromechanical parts with high impact and high strength molds, hoses, pipes and bars. 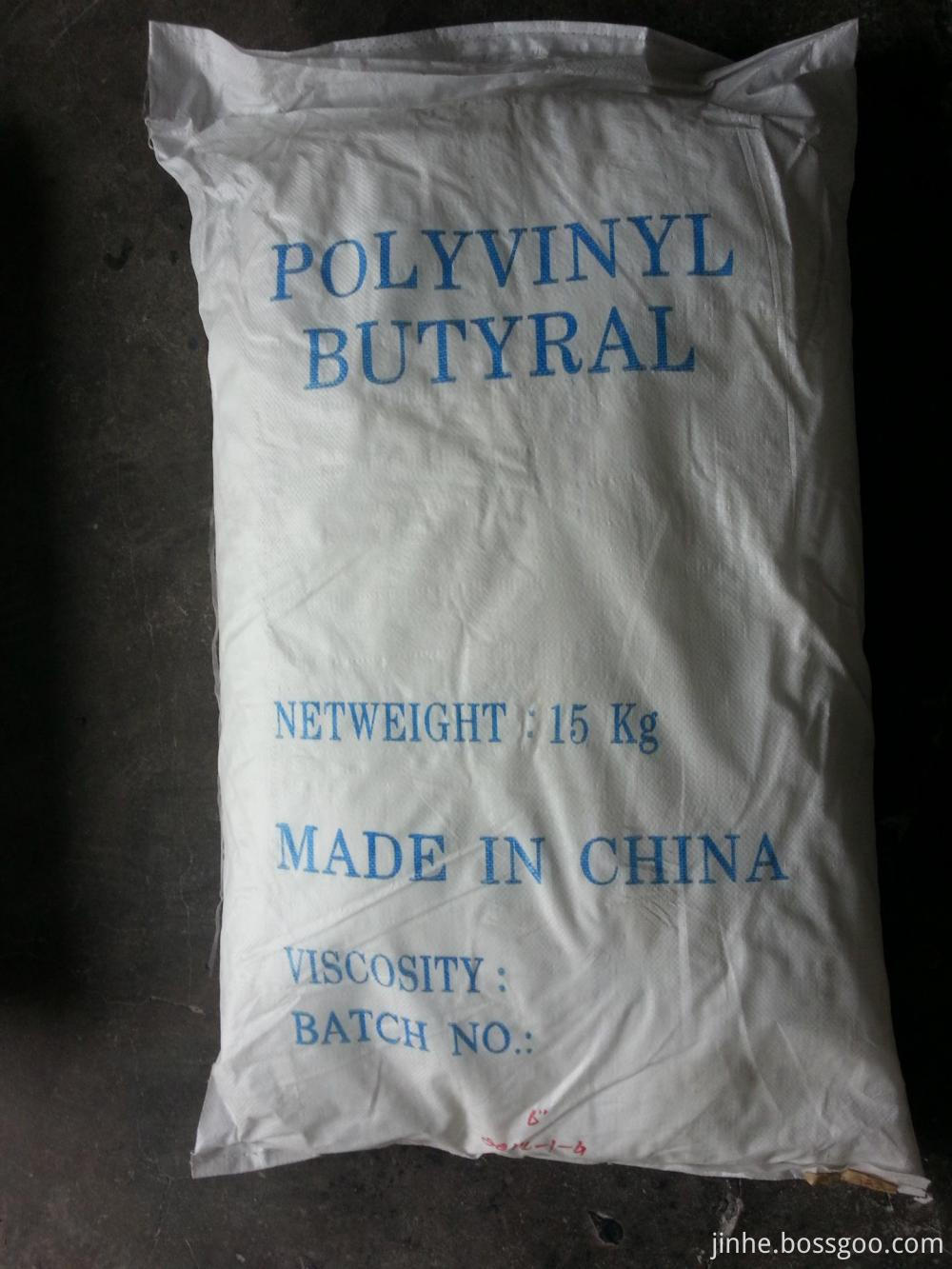 Yucheng Jinhe Industrial Co.,Ltd,which grew out of a history of More than 50 years of production Titanium Dioxide R/A State-owned enterprises Yucheng Titanium Dioxide Factory, is an international corporation, professional supplier of chemicals and related technical support.
Since the recombination of enterprise in 2003, Yucheng Jinhe Industrial Co., Ltd we extended our manufacture line to more series pigments such as Carbon Black ,Iron Oxide and chrome pigments by share&join brother factories ,Further more, we also establish a reliable supply system in our last decades market work, and get strong advantage on other chemicals supply. Through participation superior manufacturers,professional service and strongly technology support.
By the end of 2009,our productions have been exported to over 60 countries and regions in the world. including Asia, Europe, North and South America and Africa with international annual turnover more than USD20 million, 60% of the total annual sales revenue. Depend on high quality product and service, strong technical support, we enjoy high reputation and a lot regular customers throughout the world.We hope work together with regular and new friends to deep ploughing and extend the market, to create more brilliant to win the future.

Email to this supplier